“Lecturer and research fellow Dr Greg Ruthenbeck has been awarded a Reinventing Teaching and Learning grant that will see drones used in the classroom for the first time at Flinders.

The grant will enable Flinders to purchase a number of small drones – including nano-drones, micro-drones – to be used as teaching tools in the School of Computer Science, Engineering and Mathematics (CSEM).

With new federal drone laws recently coming into effect that allow the operation of very small drones without certification, students will have the opportunity to program, build and fly drones as part of their STEM learning from first year.” 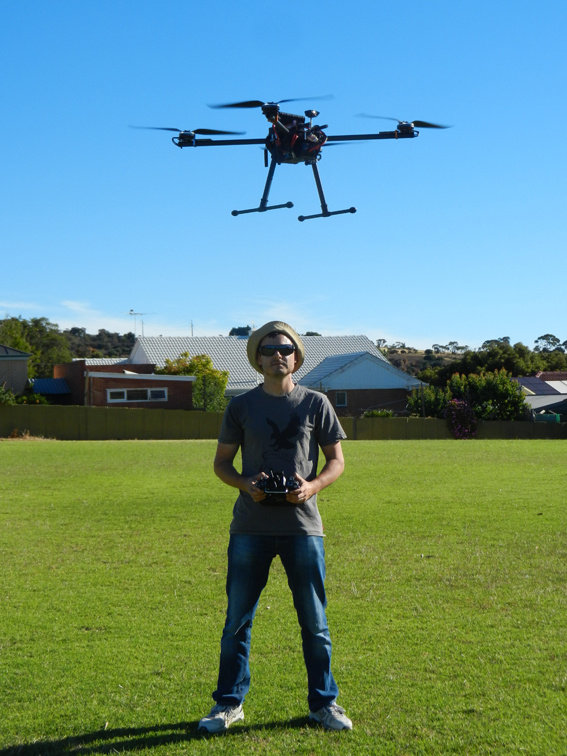 A life-long fascination with model aviation has motivated me to build many models of different sizes with different materials. From balsawood and doped tissue-paper tow-gliders, to 2.5m wings-span sailplanes (gliders) with plastic heat-shrink film covered wings. Seeing something that you’ve built from scratch as a speck in the blue sky is a thrill. Attracting the attention of eagles and riding the same air currents is a great way to spend a morning.

Then came the electric radio-controlled helicopters. As a child, it was the expense of engines and radio-controllers that limited my access to more complex aircraft. The RC Hobby magazines featured early electric RC helicopters for the elite hobbyist and they weren’t cheap or even very capable. NiCd batteries were heavy and didn’t hold much power. So when LiPo batteries, brushless motors, and 2.4G radios became commodotised, a new market of cheap and capable RC helicopters emerged.

After purchasing a Walkera Dragonfly 36 in 2004, it didn’t get off the ground without needing some spare parts. With carbon-fiber rods and ping-pong balls attached to the landing-skids, I practiced for hours to get off the ground. It took weeks,and many hours of practice, but I eventually learned to hover and fly my under-powered electric helicopter. I was hooked, and eventually owned many electric helicopters of different sizes and acrobatic capabilities. Gyros were used to stabilize the “rudder” of the helicopter, this tech became the basis of multi-axis stabilization at the heart of drones.

Flight-controllers such as Ardupilot using MEMS, together with efficient and responsive motor controllers and better batteries enabled multi-rotors (drones) to take off. I built an 800mm 1kg quad-rotor that I later equipped with 5.8GHz FPV gear and a stabilized camera gimbal. Before avaiation regulations prohibted it, I was flying over 1km away with a live video link and filming HD video. But larger drones are a hazard. Managing the risk is challenging, and larger drones are less agile than the smaller quadcopters.

Commercial quadcopters took a long time to become exciting. Off-the-shelf quacopters are excellent value, but earlier on, the only way to have a high-performance quadcopter was to custom-build your own. After many successful prototypes, I built 12 of the custom quadcopters and sold them on eBay for a 100% profit on the materials. Overall, it required too much manual work so it was not viable for scaling to larger sales. The quadcopters received excellent reviews due to the excellent performance the well-matched components produced when expertly assembled ;).

I have also built two 1.6m wing-span (delta-wing) semi-autonomous planes. I have flown them for around 100hrs of air-time. Using 5.8GHz live video links with telemetry overlays (and additional telemetry on the control-signal link) I have flown in excess of 2km range. Having failsafes that return the aircraft to the take-off location make pushing the boundaries far less nerve-wracking. Testing and proving was done at my family’s remote farm-land.

Living adjacent to a large nature reserve meant daily flight testing could be done conveniently. Many afternoons and mornings were spent flying different semi-autonomous aircraft exploring and extending their capabilities. As legal regulations came into effect, I learned the intricacies of commercial operations and was part of the group that lead the up-take of drones at Flinders University.

Founded in 2006, Airborne RC quickly out-grew its eBay store. We supplied electric radio-controlled helicopters (mainly the Walkera brand) to Australian and international customers. At its peak, we stocked almost 1000 product lines; All of the spare parts, and the helicopters themselves, for 20-odd different models. We also sourced important complementary items like tools and chargers. We even had successful OEM products made to our specifications to meet demand. We ran the business from our home and sent dozens of orders per week (per day in peak periods). Inbound marketing and SEO had us in the top 2 search results for important search terms. All-in-all it was a fun, exciting, and successful enterprise that was eventually shut-down when then niche we serviced went mainstream (we were not interested in running a shopfront and, in hindsight we probably should have sold to or partnered with a sotrefront business or chain instead of shutting it down).